I like to think that I don’t fall for trends very easily. I like what I like, and if it happens to be in style at the time, so be it. But I really try to steer clear of the latest and trendiest thing, because you know that sooner or later (usually sooner) something bigger, better, and well, trendier, is going to make an appearance and you’re going to be stuck with a room full of non-trendy things. And even if you still secretly like those non-trendy things, your mind (thanks to advertising and social media) is going to tell you that your tastes have evolved and you need to hop on the trend boat and do some shopping. Am I right?

With that being said, I love the marquee look. SOOOO trendy, I know (although I think I hopped on this boat at the tail end of its trend journey). I’ve honestly always liked it. It’s vintage, which is right up my alley, and I’ve always had a special place in my heart for things that light up. What is not right up my alley, though, is the price of a true marquee sign. Even the non-vintage ones at your local home or craft stores are outrageous, or maybe I’m just cheap. Either way, I wasn’t about to spend a hundred plus dollars on one, no matter how badly I may have wanted it for above our bar as part of our den redesign.

So I did what I sometimes do best – I created my own. I wish I could take full credit for this project, but those Heidi Swapp Marquee Love Letters sure did make my latest DIY pretty easy. I first noticed these letters at Target – big surprise since I’m there at least once a week – I walked by them though (several times) because they weren’t the real thing, and it looked like a lot of work and I didn’t want to take another project on at the moment. A few months later though, these same Marquee Love Letters ended up in my online Michaels shopping cart and  then on my doorstep a few days after that. This came after I shopped ’til I dropped, almost literally, looking for one that didn’t break the bank. Did I mention that these letters were originally $12 at Target, but I scored them on clearance for $6.49 plus 20% off at Michaels? That’s $5.19 a letter, people. I could swing that.

I decided on the word “gather”. I had to get the OK from my husband because for some reason he doesn’t like most decor with words on it, which I find so funny. I bought a sign that said “thankful” a few months back and ended up returning it because I could tell it bothered him a little (plus I really didn’t need it). He’s so laid-back when it comes to how I decorate the house, so I do try to respect the couple of things he doesn’t really like … so far it’s word decor and the color pink 🙂

My first step in this DIY was to make these letters look as old and metal-like as I possibly could … a little tricky since they’re made of a thick cardboard-like material, but I think the Rustoleum Aged Metallic Paint and Primer In One did a pretty good job. No special trick to this at all – just spray. I did a couple of coats on each letter.

The next step was to insert the little bulbs and the string of lights. One wouldn’t think instructions would be necessary for this, but they actually proved helpful since they showed you in what order to string the lights. 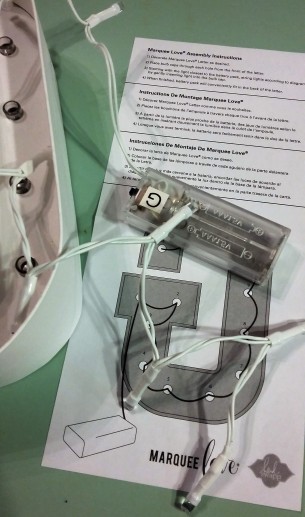 I thought I was done at this point, so on the wall they went. As much as I loved the look, I wanted a little more color. In case you can’t tell from the teal walls, I kinda like color 🙂

Each of these Marquee Love Letters comes with an insert in the shape of the letter so that you can either decorate the insert itself, or use it as a stencil to trace the letter shape onto something else. I chose the latter. I had this amazing book of scrapbook paper that I snagged from the clearance shelf at Target a while back, and I had the bright idea of using a different pattern inside each letter. Surprise! I like pattern too. 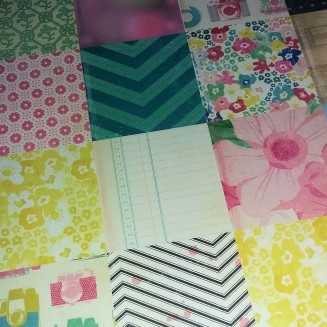 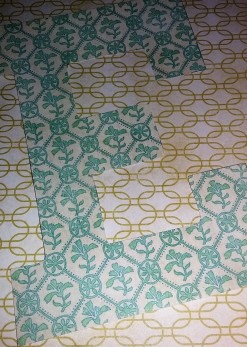 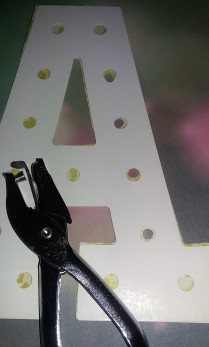 I then placed the letter shapes inside each letter, after removing the lights and bulbs of course.

Putting the light bulbs back in was a little tricky, only because the holes I punched weren’t quite large enough. Just use a little force to push the bulbs into each hole and you should be just fine. Then insert the string of lights from behind.

And once again, above the bar they went. I was a bit more satisfied this time.

The great thing about this project is that if I ever tire of the colors or patterns I chose for the inserts, I can always make new ones. I can even take the inserts out all together and go back to the simpler metallic look. I may or may not have already changed out 2 of the letters. You’re seeing the final product, but the “T” and the “H” didn’t always look like this. Indecisiveness sucks, y’all.

2 thoughts on “Gather ‘Round”

Hello out there! My name is Lindsay and I’m a 30-something year old living in the suburbs of Atlanta. I’m not trying to hide my age here – I just sometimes forget :) I got married in 2011 to my awesome husband, Ryan, and we recently had our first child, Austin, in 2014. I work as a certified Microbiologist, but I have a strong love for making things pretty. I also adore anything involving arts & crafts, room design and decorating, food, fashion, gardening, music, animals & the great outdoors. I’m a little all over the place, but in a good way (I think)! I really hope you’ll follow along as I share some of what makes me happy …

Check Out My Etsy Shop!